INVISIBLE or so it seems.

The past few weeks I have been observing people.  So what does that have to do with being invisible?  Here are some examples of what I have seen especially as I have worked with teens, but adults also do the same things.  I am using the first person reference so you can put yourself in the examples.

2.  You are trying to have a conversation with someone and they are texting the whole time, as though you were invisible.

3. You walk into a room of people you know with a smile on your face and they do not even say hello or make eye contact, as though you were invisible.

4. You open your mouth to share something and be apart of the conversation and you are totally ignored and they speak over you as though you were invisible.

These are just a few examples of what I have observed,  but I think you get the point. Not only is it rude, but it is not the way our Lord tells us to treat each other.  There are no cliques in His economy. As believers we are to prefer one another, treat one another with honor, love one another, serve one another, encourage one another, have the same care one for the other,  do you see a theme here?  All of these exhortations are making others feel visible and part of the group.

Jesus said "by this all men will know you are my disciples if you have love one for another".

So ask the Lord to show you if you are perhaps making others feel invisible and if He shows you that you are , how about asking His forgiveness and then making a conscious effort in 2015, to reverse the way you treat others.  I know I will be doing exactly that.


Posted by View from the Parsonage at 9:10 AM No comments:

Email ThisBlogThis!Share to TwitterShare to FacebookShare to Pinterest
Newer Posts Older Posts Home
Subscribe to: Posts (Atom)
Receive new posts from Bridge Builders in your inbox! Send an email to ccfchardon@gmail(dot)com. Be sure to replace the (dot). 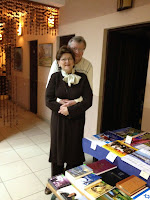